Select a sketch and click the button to view

This cluster was discovered by Lacaille and included in his 1755 catalogue as Class II No. 3. In his half-an-inch 8x telescope he saw it as a "very close group of 10-12 stars."

Sir John Herschel observed it frequently while at the Cape of Good Hope with an 18-inch f/13 speculum telescope. His first record reads: "An orange-coloured star 8th magnitude, in middle of a large and magnificent cluster of perhaps 200 to 250 stars 8..16th mag. Many of the larger magnitudes, and really a superb object. Very visible to the naked eye, etc." His second entry reads: "Place of a double star in a fine scattered pretty rich cluster of large stars, which fills field, and may contain 150 stars, large and small. No other remarkable double star in it." His next entry describes it as "A star 6th magnitude, one of the chief of a large splendid cluster, coarse, filling field, 20'..25' diam., stars 9..13 mag." His fourth observation saw it as "a star 6th magnitude, in a superb, very large cluster. Rich and brilliant. In the northern part about 20 seconds; following this star is a star of 5th magnitude, ruddy. Has two or three neat doubles in it. The whole region is rich in large stars." His final observation was recorded as: "chief double star is a fine cluster 7th class, stars 7..12 mag. Fills field, and has outlying stars two or three fields preceding."

Discussed, based of F-A plates.

"thin, irreg., with some bright stars, visible to the naked eye." He gives the approx. diameter as 80 arcmin.

Burnham calls it a "large and brilliant group, easily visible to the naked eye, with more than a 100 stars scattered over a field 1 degree in diameter. The bright red giant star near the centre is very obvious in small telescopes; T.W. Webb called it orange.

Glen Cozens writes: "NGC 2516 at the False Cross' foot is one of the Southern Hemisphere's best open clusters and is easily visible to the naked eye as a distant frosty glow. A dazzling red star forms the heart of NGC 2516, and a small telescope will show more than 100 stars radiating from it."

Harrington writes that this is "an impressive open cluster isolated in western Carina ... On dark, clear winter nights, it is visible as a soft, pale smudge spanning about a Moon's diameter. Yet with the slightest optical aid it erupts in starlight! Seven-power binoculars resolve about a third of the 80 component stars, while a 6-inch telescope can show just about all. A trio of orange orbs dominate the scene of otherwise pure white stars. ... I also heard other binocularists [at the Winter Star Party] whimper their sadness that [this] cluster is not visible from back home."

Gerd Bahr-Vollrath (Noosa Heads, Queensland, Australia) writes in The Webb Society Nebulae and Clusters Section Report No. 11, January 1993: "A large, bright and moderately dense cluster with around 60 stars of a wide range of brightnesses. Visible to the naked eye. (8-inch f/12 SCT)" 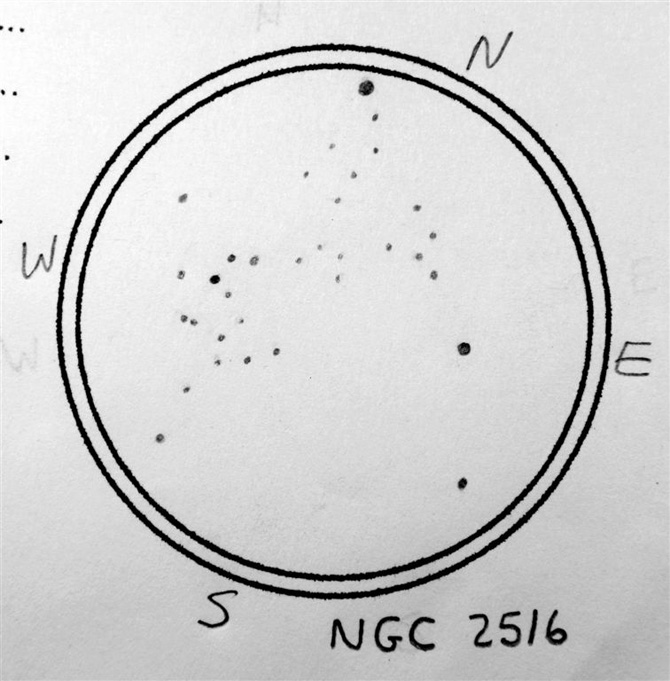 Notes: Open cluster. Different coloured stars. Orange star in the middle. Stars are grouped into two triangles ï¿½ which fit into a large triangle. Looks almost like a Xmas tree with lights on the tips of the branches.

NCG2516 is an open cluster that rivals M41, observed earlier. Being about 2 or even 3 times larger than Little Beehive open cluster, it is clearly visible to the naked eye and appears as a very distinctively cloudy/fuzzy object north of Canopus in Carina. At 48x magnification the loosely arranged stars become more apparent with two red/orange coloured stars on the edge of the cluster shining very prominently.

Beautiful, large, widely-space, slightly extended NW open cluster, a good example of stars closely associated. Bright, individual stars stand out to the right of the cluster. A beautiful example of a very rich open cluster. The entire cluster is sprinkled with a variety of different coloured stars one very red. Slightly elongated in a NS to EW direction with prominent chains of stars. Numerous double stars are apparent in the cluster which also sports a lovely red-coloured star positioned nearest the main concentration. Two of the stars end in a chains. Two darker areas are also apparent in the east and west of the centre of the cluster, and it looks more busy in the southern part. I will get back to this one to study it in more detail and a sketch.

Bright, large, very rich cluster. Remarkable. Obvious with the naked eye as a mottled glow. At first sight, the wide field of the binoculars show four conspicuous stars, three in an arc, the fourth obviously orange. Immediately south is NGC 2516, a very very rich open cluster, with five large and a host of small stars. Down to 9th magnitude, there are at least 30 stars, and many more can be seen with averted vision. The orange star mentioned is HR 3153, (V = 5.17, Bï¿½V = +1.74). Lacaille's description: Puzzling. Lacaille says "10 to 12 stars" ï¿½ I see 5 stars as prominent and the rest of very similar, considerably fainter, magnitude.

1998-04-27/28, 11x80 tripod-mounted binoculars, Die Boord. Seeing average, transparency average, dew. "Moderately bright cluster, clearly resolved into stars. Several (five) bright stars near at hand, not part of the cluster; an orange one northeast, and a fainter orange one northwest. The brightest stars in the cluster form a 6' long triangle; the westernmost two are orange, and the most westerly has a small companion close northeast. From this triangle, much fainter stars are scattered irregularly about, in a 17' area sweeping to the north, though northwest, to a westerly direction. Within this space, more than a dozen stars are counted, and many more sparkle out with averted vision. Should be wonderful in the 6-inch.

1998-01-26/27, 6-inch f/8.6 Newtonian, Stellenbosch Rifle Range site. Stunning extremely large (more than fills 40 arcmin field) open cluster. Great brightness range - large and smalls stars. A curved row of three 6/7th mag stars to the north. Many dark, open areas within. Twenty brightest stars (including two pale-yellow and four orange stars, and two sets of wide coloured double stars), with a further estimated 80 fainter ones. The richest region lies to the south, while there are two noticeable dark regions, one on the western side, another on the eastern side. The two patches are well shown with the K9mm at 144x.

1997 October 28, Tue/Wed: Jonkershoek, seeing 3, transparency 3, sky darkness 4, lim.mag. at south pole 6.0 (naked eye), 10.7 (binoculars). 11x80 tripod-mounted. "What a splendid sight! A glorious mass of stars on a rich field. The main body of the cluster is a regular-sided diamond, lying north-south/east-west, and filled with stars. A broad bridge of stars and stardust goes briefly northwards, and then branches east and west, each branch ending in an orange star. The bridge has a small but distinct black oval in its centre. On the east and west side of the bridge, also, are black vacancies, helping to define the bridge. The eastern tip of the diamond is capped by a bright off-white star. West of this star, near where the bridge comes out, is an almost equal double star (southern component brighter). Within the diamond, I count 22 large and small stars; amidst these is an unresolved glow."

A 10-inch f/5 at 30x shows it as a beautiful scattered group of bright and faint stars, gaurded on its west and north by three bright stars. Many streamers can be traced with the eye. Near the centre of the cluster is wide, equal double star, with one component, towards the south, clearly red in colour. One of the far northern outliers also appears red.

The cluster is almost a degree in diameter, clearly visible to the naked eye just west and slightly south of the tip of the False Cross.

It is best seen with a large binocular; it is a stunning sight through 11x80 binoculars. It has both large and small stars. The brighter stars are coarsely scattered whereas the fainter stars lie lumped to one side.

Viewing with a 2-inch refractor, there is a red star in the centre, along with several multiples visible using slightly higher magnification.

Sky Conditions:Dark moon and stars magnitude 6 and fainter are barely visible with the naked eye.

Transparency of the Sky:The most clear sky possible.

Chart Number:No.15(Extract taken out of "Atlas of the Night Sky"). 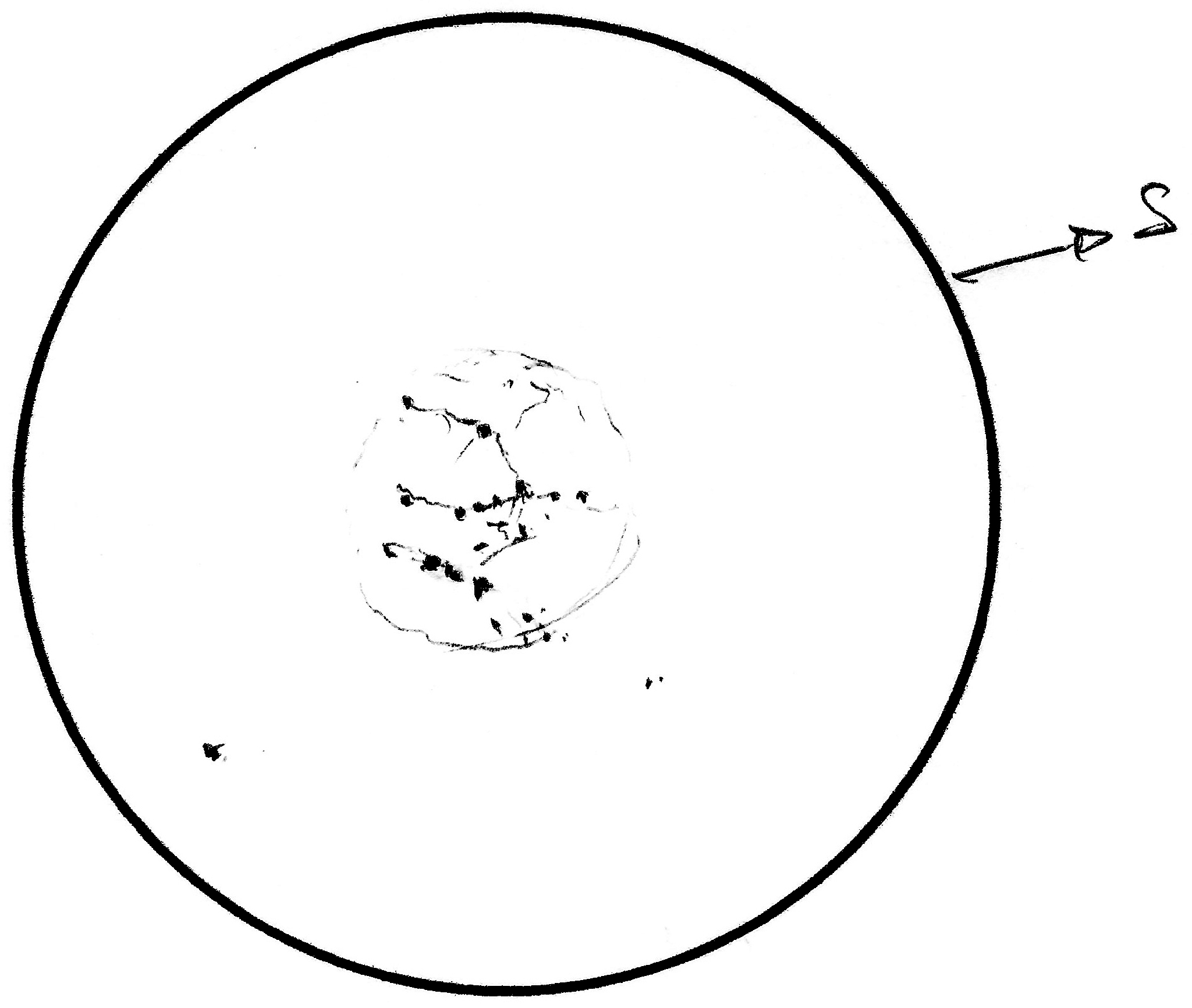