Select a sketch and click the button to view

Select a photo and click the button to view

James Dunlop observed this object from Paramatta, New South Wales, and included it as No. 617 in his catalogue of 1827. Using a 9-inch f/12 telescope, he described it as "a very faint pretty large nebula, about 2' broad and 4' long, very faint at the edges. The brightest and most condensed part is near the south following extremity; a small star is involved in the north preceding extremity, and there are two small stars near the south extremity, but not involved."

Observed by Sir John Herschel at the Cape of Good Hope with an 18-inch f/13 speculum telescope. He recorded it as "pB, vL, oval, vgvlbM, resolvable, 5' long, 3' broad."

Notes that this is a 10.0 mag galaxy. Their coded description reads S,EL,BM,DIF,PD,DKLNS VPCHY.

Included in the CCD-atlas of Ryder S.D. & Dopita M.A. (1993) "An H-alpha Atlas of Nearby Southern Spiral Galaxies" Astrophys.J.Suppl. 88, 415. They note: "This is another comparatively poorly studied galaxy despite having a lagre angular size and abundance of H II regions. One prominent arm extends southward from the small bulge and carries some of the most luminous H II regions in this galaxy, but once again, there seems to be no counterpart on the opposite side.Most of the rest of the H-alpha emission comes from the next arm outwards. Rifts of dust criss-cross the disk, but at this moderate inclunation (about 67 degrees0, it does not seem likely that such dust could conceal any significant H II regions on the far side of the disk."

Hartung notes: "lying in a trapezium of four stars in good contrast with a scattered star field is this conspicuous hazy ellipse about 5' x 3' in pa 160 deg, rising to the centre broadly . . quite easy, though faint, with 7.5cm."

Houston includes this galaxy in his Hydra Hysteria. He calls it a "big spiral galaxy about 10' diameter and 10th mag. It lies about 1.5 degrees east-southeast of a small triangle of 6th and 7th mag stars."

closest triangle * is 1'.8 from center close to maj axis.

1994-02-16, 00:30, Jonkershoek, 11x80's tripod mounted, dewing. Picked up this bright galaxy readily. It appears mottled, showing the involvement of faint stars. It is readily seen as an elongated (cigar-shaped) patch. With averted vision, I would estimate the maximum length as 23'. 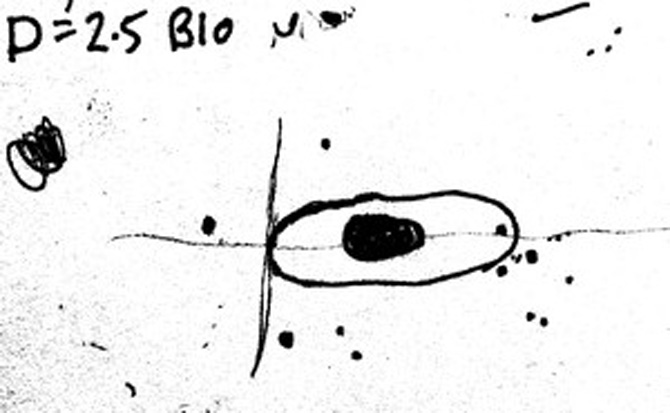 One diagonal of Corvus points the way to 3.5-mag xi Hydrae, which is the starting point of your star hop to the spiral galaxy NGC 3621. At 120x the galaxy appears as a large, more-or-less elongated glow set tightly amongst stars. At 300x it shows as an elongated glow with dim outer halo. The bright central part is evenly lit, with no appearance of a nucleus. 3.3' x 1.6' (PA from sketch: NW-SE). The rough sketch shows all visible stars close-surrounding the galaxy. (D: 20090129/30. Own star charts)

The galaxy displays a large oval in a north-west to south-east direction with a barely brighter nucleus. The galaxy is some what hazy around the edges and perhaps a slightly brighter and edge north-western side.

Just a smatch of light. Little brighter to the middle. Resembles a sharp edge. 4 stars. Small.

I named it the Southern Cross galaxy. A trapezium of stars closely surrounds the galaxy as if it could be holding it. Elongated in a north south direction it looks mottled and slowly getting brighter to a wide dense core (218x and 346x). Large smudge of light, very much pleasing on the eye. Appears like a soft cloud surround in mistiness on its periphery with faint splinter stars embedded on its surface.

Sky Conditions:The fainter parts of the Milky Way are barely visible.Haziness only visible on the horizon.Atmosphere stable with little interference.

This galaxy has a spiral-like shape which is seen edge on with two faint extensions on both ends and that this galaxy has plenty of dark regions noticeable around this galaxy.The galactic nucleus of this galaxy is moderately condensed.This galaxy measures 7.1'x 4.4''with P.A.NNW/SSE.Chart No:217,Vol.2.